We are open for lunch and dinner Tuesday-Saturday, closed Sundays & Mondays. Food is our passion and sharing it with our guests is our joy, we look forward to seeing you soon.

We will be closed on Thursday, November 24th only for Thanksgiving Day. We will also be closed on December 24th and 25th for Christmas. We are now taking reservations for New Years Eve for our Prix Fixe Special Menu.

Our lunch and dinner menu items and wines by the bottle are available for carry-out.

Our full menu is available for delivery/online ordering by using the online order tab.

We can help with your entertaining needs at OAKLEYS bistro, your home or at a place of your choosing.

We offer Gift Certificates online or in person at the restaurant.

Many of our house-made spices, soups and dressings are packaged for your OAKLEYS At HOME use.

Be the first to get our news: sign up for our periodic emails at chris@oakleysbistro.com

With a passion for food, our Kitchen Team has the joy of matching and pairing these diverse qualities and characteristics in creating signature dishes, pleasing to the palate as well as the eye. We love what we do. 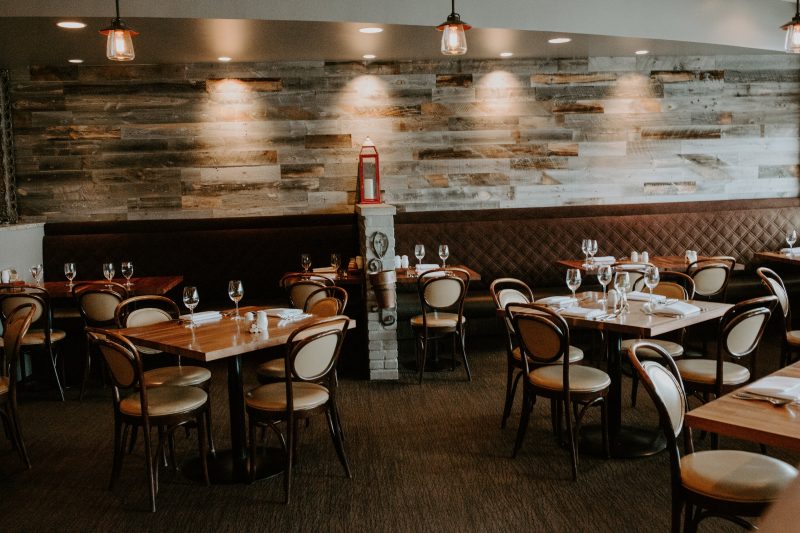 Host your next event at OAKLEYs bistro. Our dedicated event coordinator will work with you to plan the perfect day.

It’s commonly thought that you know you’ve found your life’s calling if you’d do your job for free. Chef Steven J. Oakley personifies that idea. His career began at age 16 when he offered his services to a suburban Chicago restaurant for free: “I just wanted to work, I wanted to learn,” says Oakley. That emphasis on hard work and continual learning has culminated in Chef Oakley arriving at the top of his profession in Indianapolis.

That structured education didn’t temper his need to learn from other chefs in other kitchens and he spent many weekends traveling to New York City to work in some of the most prestigious restaurants in the country, including The Park Avenue Café and Lutece–for free of course. He spent summers back in Chicago where he worked at the famous Charlie Trotter’s. Following a brief stint at the Scottsdale Princess Resort in Arizona, Chef Oakley returned home to Chicago where he worked for another landmark restaurant, Printer’s Row, and again, Charlie Trotter’s.

Benvenuti, a venerable Indianapolis eatery, called him away from the windy city for good. He spent a year there before joining forces with Something Different Restaurant in 1993, where he spent nine years receiving many accolades including nominations for the prestigious James Beard Rising Star Chef’s award and the restaurant’s induction into the Restaurant Hall of Fame.

And now, as Chef/Proprietor of OAKLEYS bistro, which he established in December 2002, he is living his childhood dream and hoping to help others do the same. An unpretentious, neighborhood American bistro is very different from the haute cuisine establishments of Chef Oakley’s previous experiences. Put in his words, “We wanted to dispel the notion that special food should be reserved for special occasions: we created an affordable, everyday destination where every meal is a special occasion.”

Achieving such recognition as being named “one of the hottest restaurants from coast to coast” by Bon Appétit, receiving the American Culinary Federation’s National Achievement of Excellence Award, and “Restaurant of the Year” and “Superstar” from the Indianapolis Monthly Magazine, OAKLEYS bistro reflects its owner’s passion for food and sharing it with others. But Chef Oakley’s sharing goes beyond the traditional, evidenced by the Restaurant & Hospitality Association’s Neighborhood Award to “honor restaurant operators who go above and beyond supporting their communities.” The Association specifically recognized that not only does Oakleys bistro contribute a portion of its sales of products to Second Helpings, Indianapolis’ only food rescue, job training and hunger relief program, but also Chef Oakley opens his kitchen for training and hiring those who demonstrate a true passion for food and who understand the demands placed on a first class kitchen team.

From capturing first place at the Food Network—Simon Mall’s “Super Chefs Live” competition and being invited as a guest chef for Cakebread Cellars’ American Harvest Dinners and Epcot’s International Food & Wine Festival to being named one of Indy’s Best and Brightest by the business community and honored for the past several years as a semifinalist in the James Beard Foundation’s Best Chefs in America Awards, Chef Oakley most cherishes the accolades from those who join him and his Team for lunch and dinner at OAKLEYS bistro. When asked to what he attributes his success, Chef Oakley responds, “You have to love what you do.” He does—and it shows.

We will be closed on Thursday, November 24th only for Thanksgiving Day. We will also be closed on December 24th and 25th for Christmas. We are now taking reservations for New Years Eve for our Prix Fixe Special Menu.

Steve Oakley chosen as a James Beard Award semifinalist. Read about it.

Chef Steven Oakley was the winner of Beat Bobby Flay – “Inside Scoop”!